Effluent from both plants is used for irrigation, dust suppression, and other approved uses in Flagstaff, as approved by the Arizona Department of Environmental Quality. Unused effluent is discharged into the Rio de Flag.

Did you know that the Rio de Flag and Wildcat Hill WRPs both use solar energy to help reduce their energy costs? You can learn more by reading Energy Savings from using Solar at City Sites .

The Wildcat Hill plant, located at 2800 North El Paso Road in Flagstaff, is an advanced wastewater treatment facility capable of treating 6 million gallons per day. The facility treats the sludge generated from the Rio de Flag WRP in addition to its own. Methane gas, which is generated from the treatment process, is used to power equipment and reduce electrical power consumption. The plant is capable of generating enough standby power to operate indefinitely in case of a power failure. 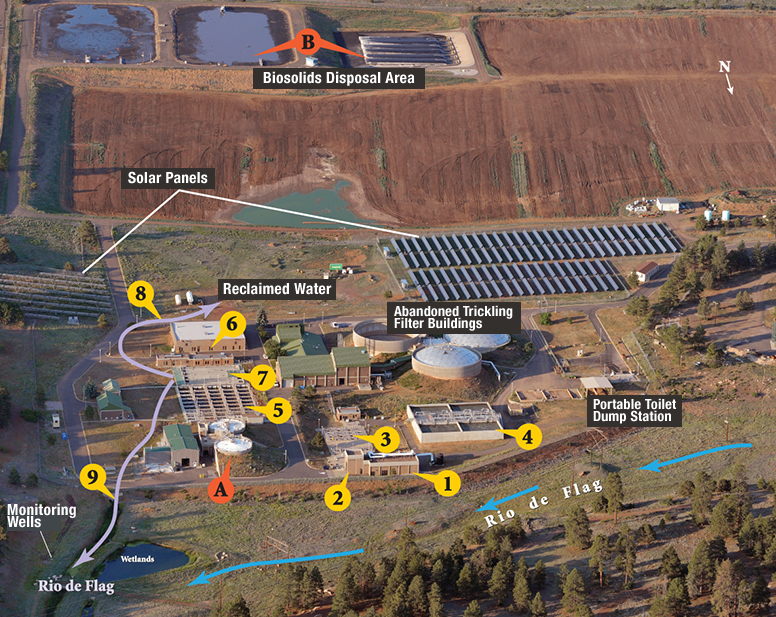 Wastewater enters the headworks (1) and flows through a bar screen, where large debris is removed. It then flows into the grit removal system (2), where inorganic solids are removed while the organic material continues on to the primary clarifier (3). In the clarifier, heavier organic solids settle to the bottom of the tank while lighter solids float to the surface. Both are removed and pumped to the anaerobic digester.

The wastewater now undergoes the integrated fixed-film activated sludge (IFAS) process (4), where remaining organic material and ammonia nitrogen are converted to more treatable products such as settleable solids and nitrogen gas. The secondary clarifiers (5) remove the settleable solids produced in the IFAS; these solids are either recycled back to the IFAS or pumped to the anaerobic digester.

During the final steps of the wastewater treatment process, the wastewater enters either the membrane or sand filtration areas (6), which remove any remaining particulate matter. The water is then disinfected (7) to neutralize any remaining pathogens. The water is now fully treated, and is either distributed into the City's reclaimed water system (8) or discharged to the Rio de Flag (9). Both the Wildcat Hill and the Rio de Flag Water Reclamation Plants meet all of the Arizona Department of Environmental Quality's requirements for high-quality reclaimed water.

The solids from the primary and secondary systems are pumped to the anaerobic digester (A) for final solids treatment. This process breaks down the organic material and generates natural gas (methane) which is used to produce electricity for the facility. The solids are then disposed of in the bio-solids disposal area (B).

Photos of the IFAS and WRP The Rio de Flag Plant, another advanced wastewater treatment facility, is capable of treating 4 million gallons per day via screening, primary sedimentation, aeration, secondary sedimentation, filtration, and disinfection. The plant uses the Bardenpho process — a two-stage anoxic / aerobic process designed to reduce the nitrogen content in wastewater. Because of the plant's location near the center of Flagstaff, the decision was made to use ultra-violet radiation for disinfecting rather than the traditionally used chlorine gas. 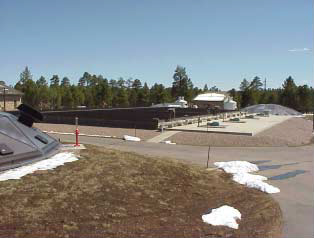