This trail begins at Wheeler Park in downtown Flagstaff and generally follows the Rio de Flag for several miles to the Cheshire neighborhood in the far northwest corner of town.

Along the way the trail passes through a variety of natural areas, including willow-lined riparian wetlands, stands of mature Ponderosa pines, and rock outcroppings, and oak thickets. At times the trail also opens to magnificent views of the San Francisco Peaks.

Other highlights along the trail include the historic Townsite neighborhood at the southern end; and Francis Short Pond, a small picturesque reservoir that is frequented by a variety of waterfowl. Toward the north end, the trail follows of the rim of the steep, rock-walled canyon of the Rio de Flag for a short time. 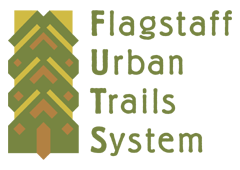 As part of the Rio de Flag flood control project, this trail will be extended south from its current terminus at Birch Street along the channel of the Rio de Flag. Trail underpasses are planned at Route 66 and the BNSF railroad tracks to carry the trail to the south side of the tracks. A portion of the existing aggregate trail from Birch Avenue to Bonito Street, will be replaced with a concrete trail.