The City of Flagstaff is developing a community-driven Climate Action and Adaptation Plan to set decreased emission goals and increase the resilience in our community to climate change impacts.

Flagstaff is already experiencing the impacts of climate change like extreme weather. These events are expected to increase, with higher intensity. This story map explores the drought, fire, flood, heat and wind events Flagstaff has experienced in its recent past.

Over the past few decades, Northern Arizona has gotten warmer, resulting in reduced water availability. The impacts of these changes vary throughout our region. For example, the U.S. Geological Society studied the changes in the land where the Navajo Nation resides and found that streams that flowed in the 1980's are now dry washes that never, or rarely flow. These hotter temperatures increase evaporation, making the soil drier and unsuitable for most plants. As a result, sand dunes are growing. To learn more about the impacts of climate change on Navajo Nation watch this video produced by the U.S. Geological Society. 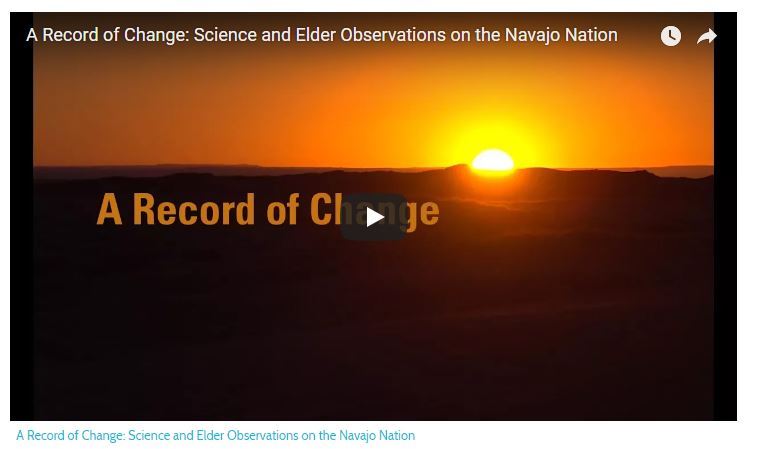 Over the course of Earth's history the climate has changed many times, experiencing climactic shifts from unbearably cold ice ages to periods of intense heat and drought. Today, it is not the fact that the climate is changing that is so alarming, but the rate at which this change is taking place and the fact that 97% of scientists agree humans are the primary cause.

In the past, changes in Earth's climate have happened over long periods of time, which gives time for its inhabitants to adapt. In instances when abrupt changes have occurred, they have been accompanied by mass extinctions or drastic changes to Earth's environment.

What is causing the change?

The changing climate is linked to rising concentrations of greenhouse gases such as carbon dioxide, methane and hydrofluorocarbons (HFCs) in the atmosphere, which insulate the planet and cause it to warm. It has been shown that reducing these heat-trapping gas emissions will reduce the speed at which the planet is warming, thus mitigating the expected threats to communities and the environment.

Over the past 50 years, humans have been adding carbon dioxide to the atmosphere at an alarming rate and the temperature has been rising: 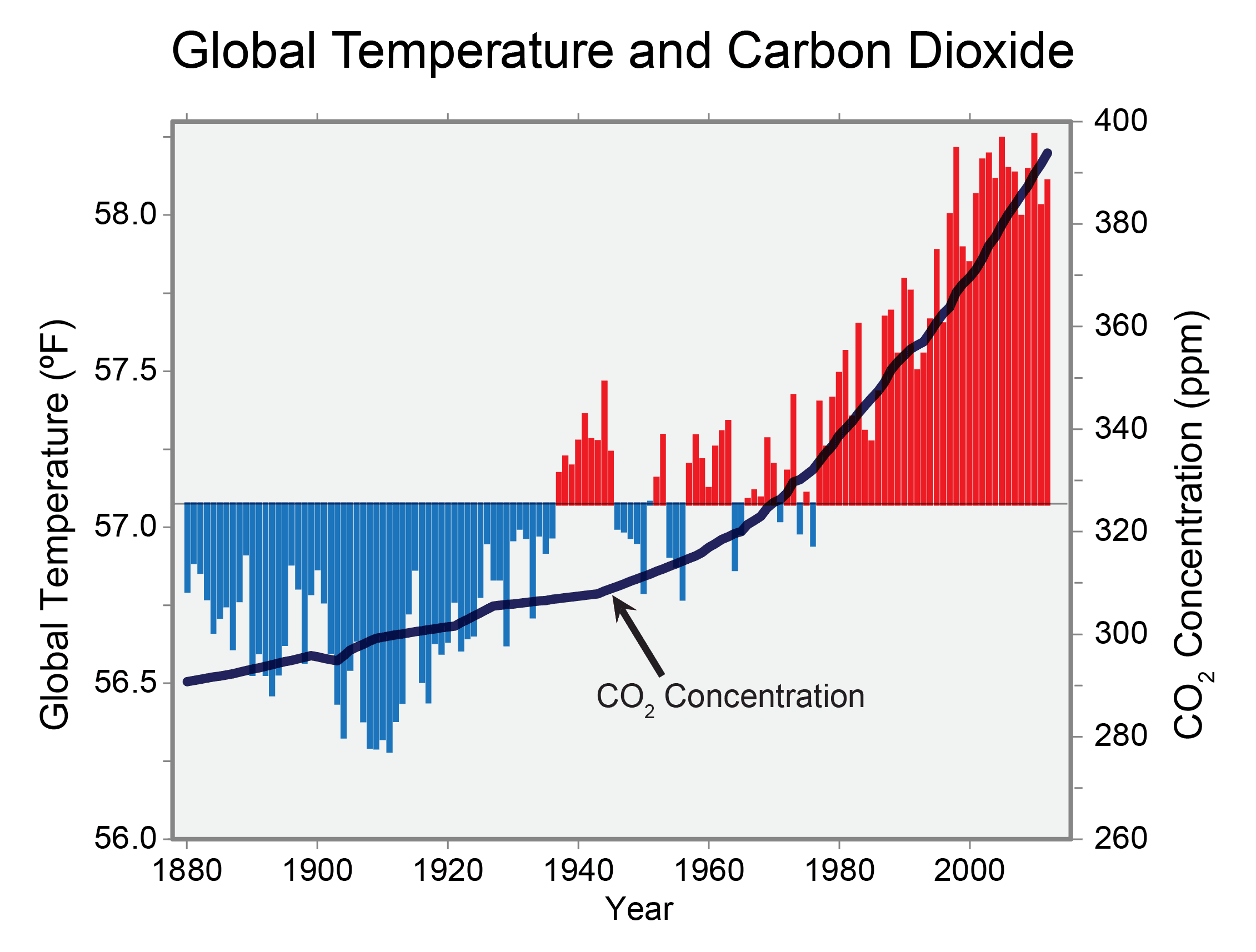 Caption: Global annual average temperature (as measured over both land and oceans) has increased by more than 1.5°F (0.8°C) since 1880 (through 2012). Red bars show temperatures above the long-term average, and blue bars indicate temperatures below the long-term average. The black line shows atmospheric carbon dioxide (CO2) concentration in parts per million (ppm). While there is a clear long-term global warming trend, some years do not show a temperature increase relative to the previous year, and some years show greater changes than others. These year-to-year fluctuations in temperature are due to natural processes, such as the effects of El Niños, La Niñas, and volcanic eruptions.

Climate models are used to predict the future climate based on the dynamics of the climate system and trends in carbon emissions. Reducing carbon emissions can greatly decrease global warming, as seen below. This is why it is important that we reduce emissions now. 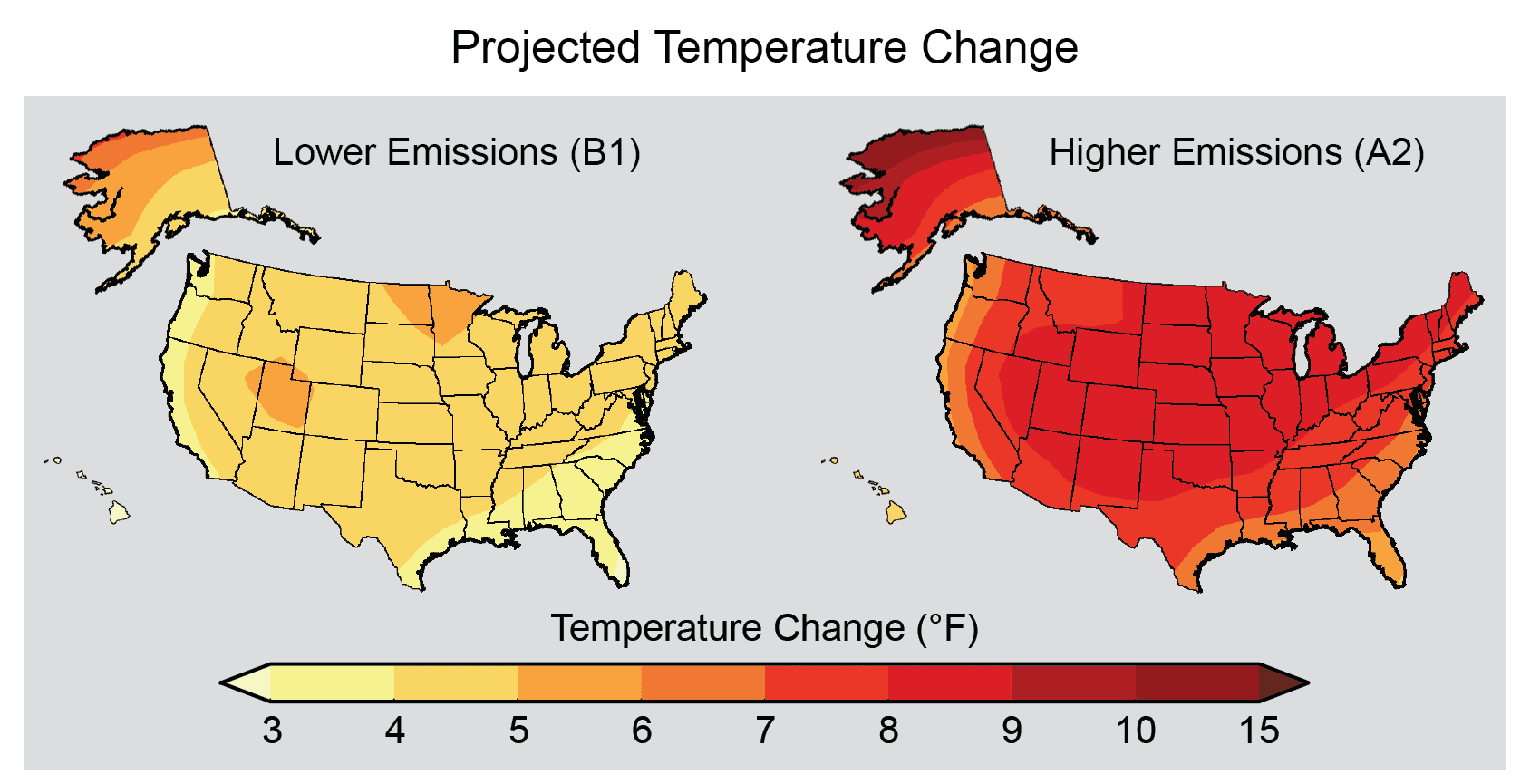 Caption: Maps show projected change in average surface air temperature in the later part of this century (2071-2099) relative to the later part of the last century (1970-1999) under a scenario that assumes substantial reductions in heat trapping gases (B1) and a higher emissions scenario that assumes continued increases in global emissions (A2). (See Appendix 3: Climate Science, Supplemental Message 5 for a discussion of temperature changes under a wider range of future scenarios for various periods of this century).

Do you have questions about climate change, the science behind it, and what to do about it? The National Climate Assessment has compiled a list of Frequently Asked Questions to help answer your questions.