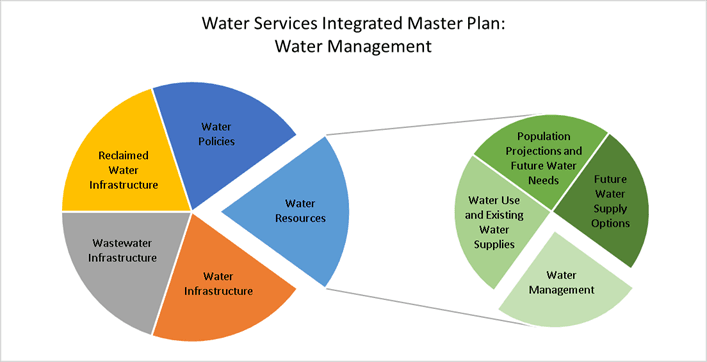 The City of Flagstaff was established in 1882 as a railroad stop for train water and passengers and first utilized spring water near what is now known as "Old Town Spring." This water source became very limited and a new supply was soon needed.

After the city became incorporated in 1884, Mayor Abineau began the first of three major water supply importation projects from outside of the City's corporate limits. This first reliable water supply consisted of a clay pipeline connecting the Inner Basin water supplies with a 2.5 million gallon reservoir north of Flagstaff and a second pipe that conveyed the water to the railroad and City citizens. Residences paid $2/month for the service, a day's wage for most men at the time.

As the City's water demands grew, the City purchased a small, private sewer company in 1917. With the new water system in place, many building were constructed with toilets which led to the problem of sewage disposal. The sewer was discharged into "sewer canyon" in the vicinity of today's Butler Avenue and the Rio de Flag.

Due to the intermittent nature of flows in Walnut Creek and the high infiltration rates in the bottom of Lower Lake Mary, a second dam was constructed up-gradient. The Upper Lake Mary Dam and the Lake Mary Water Treatment Plant (WTP) were constructed in 1941 to store, treat, and deliver the surface waters to citizens. The dam was raised an additional 10 feet to its current height in 1951 to increase the storage capacity to 16,300 acre-feet.

In 1950, Arizona health standards required the City to replace old sewer lines and extend new ones, and essentially eliminated all outdoor privies that remained in the City.

Use & Treatment of Groundwater

Also during the 1950s, drought required the City to look for more reliable water beyond surface water. The first use of groundwater began with the third major water supply importation project, the drilling of a well in the Woody Mountain area in 1954.

The City's first wastewater treatment plant (WWTP) was constructed and began operations in 1956, with a capacity of 1 million gallons per day (MGD).

In 1958, the City Council established a citizens advisory group, a precursor to today's Water Commission, to address the increasingly urgent water matters. Six members were appointed, including the Mayor and City Manager.

The City continued the expansion of groundwater supplies by developing a well field adjacent to Lower Lake Mary in 1963. A new 8 MGD Lake Mary WTP was constructed adjacent to the original 1941 facility to take advantage of the Upper Lake Mary stored surface water. There are currently seven wells in operation with an eighth well not yet connected to the distribution system due to financial constraints.

In 1971, the Wildcat Hill WWTP was constructed in response to federal and state agency warnings about the quality of the wastewater discharged into the Rio de Flag. The 3 MGD plant became operational that year and plant capacity was subsequently increased to 6 MGD in 1981.

On May 17, 1973 the City of Flagstaff was designated as having an Adequate Water Supply as part of the state's Water Adequacy Program. However, at the time, the City was never required to prove hydrologically that it had adequate supplies to support projected water needs 100 years into the future.

The City's first use of reclaimed water was at the Continental Country Club golf course in 1975 using effluent from the Wildcat Hill WWTP. The City expanded its reclaimed water system with the construction of the Rio de Flag Water Reclamation Facility (WRF) and a two-million gallon storage tank at Buffalo Park in 1993.

In order to address the continued increase in water use within Flagstaff, the City Council adopted the first water conservation ordinance in November 1990. The first ordinance established the City's water conservation program and required water saving devices, such as low flow toilets.

In 2009, the City expanded its reclaimed water system again. Treatment technologies at the Wildcat Hill WWTP were upgraded to produce Class A+ water and an additional booster facility and a pipeline were constructed to facilitate reclaimed water delivery. These additions connected the plant to the City-wide reclaimed water distribution system. These upgrades increased system reliability and allowed for increased use of reclaimed water.

Below is a summary of water supply augmentation projects from the last century that have attempted to solve northern Arizona's water supply issues. While each of these projects ended up at various levels of concept, design, or construction, only one was ever fully completed for the City of Flagstaff, the North Central Arizona Water Supply Study in 2006.

1919 - The Most Remarkable Domestic Water and Power Project

Between 1913 and 1919, Charles Spencer developed the earliest concepts to capture rainwater by proposing to store the harvested water in Flagstaff area volcanic cinder cones and then pipe the water into the City. In 1915, Spencer incorporated the Coconino Water Development and Stock Company and developed a financial prospectus proclaiming "The Most Remarkable Domestic Water Project and Power Project in the United States."

After raising $50,000 from investors he began to work on the first of four proposed projects, a Crater Lake reservoir. Water from a ditch above Hart Prairie and below Snow Bowl was transported via a tunnel into Crater Lake. A pipeline into Flagstaff was proposed but never constructed.

On the east side of the San Francisco Peaks, Spencer constructed a tunnel under Lockett Meadow and a pipeline downhill to Deadmans Flat to provide water for livestock. However, given the high pressures at the down gradient end of the pipeline, it exploded when turned on and subsequently was never used.

There were two other projects envisioned by Spencer, but due to a lack of funding none of them were ever started beyond the concept stage. In 1920, the financial backers were unable to collect any money from these projects and all water development worked ceased.

The City was continually seeking solutions to its water supply problems when it first proposed a dam in Switzer Canyon in 1919 in order to form a recreational lake and water storage. Then in 1921, after another low winter runoff, another proposal was considered to build a reservoir in Fort Valley in order to collect runoff from the Rio de Flag.

The City hired engineers and geologists from Los Angeles in 1922 to evaluate both of these projects and the Crater Lake runoff proposal and they dismissed all three proposals as being too impractical for a variety of reasons.

In 1932, the City hired John Carollo Engineers to conduct field surveys and reconsider the Fort Valley Dam. He came to the same conclusion as previous studies that the dam would be too costly and water quality would be poor. Carollo suggested that the answer to the City's water supply problems might be the use of "underground" water not immediately dependent on rainfall.

In 1974, City of Flagstaff staff met with the Arizona Water Commission (pre-cursor to the Arizona Department of Water Resources) and the U.S Bureau of Reclamation. At that meeting, the Central Arizona Project (CAP) and the Wilkins Dam Project (i.e., Mogollon Mesa Project, below) were discussed.

The City submitted an expression of interest letter for Central Arizona Project water in 1969 based upon projected water needs between 1980 to 2030. At this same meeting, the Arizona Water Commission Director, Wes Steiner, recommended the City to submit a new application for municipal and industrial CAP water with the possibility of exchanging that supply for water from the Verde River or Blue Ridge Reservoir.

City staff expressed concerns about entering into an agreement with CAP without knowing whether an exchange agreement could be successfully negotiated since the letter of commitment would be a "morally binding agreement".

Harshbarger and Associates and John Carollo Engineers jointly conducted a Report on Water Resources for the City of Flagstaff in 1972 to provide an understanding of the region's geology, estimates of water quantities of existing supplies, costs of proposed water supply development projects and their recommendation to develop water supplies on a five-year basis and long-range basis.

None of the projects were ever developed by the City except for effluent reuse.

The U.S. Bureau of Reclamation Lower Colorado River Regional Office conducted a feasibility report on the Mogollon Mesa Project that appears to have been completed in 1975. The plan was to construct Wilkins Dam on East Clear Creek and deliver water from a reservoir to Upper Lake Mary. Additionally, there were plans to line and enlarge Upper Lake Mary to accommodate the new water supply and provide sufficient off-stream storage.

The Red Gap Ranch alternative was found to have sufficient groundwater but was noted to have complex yield conditions and a potential impact on Clear Creek and Chevlon Creek. The Lake Powell and Lake Mead alternatives were determined nonviable due to federal law and high costs, respectively. For the Redwall-Muav Aquifer alternative, two well fields were evaluated and it was found that prospective wells would have to be quite deep and would likely have highly variable yields. Currently, only one single well exists in the Aquifer.