Ever wondered where your water comes from or where water goes when it "disappears" from puddles after it rains? Check out our Flagstaff Water Cycle diagram created by local hydrologist, Margot Truini, to better understand our local water cycle. 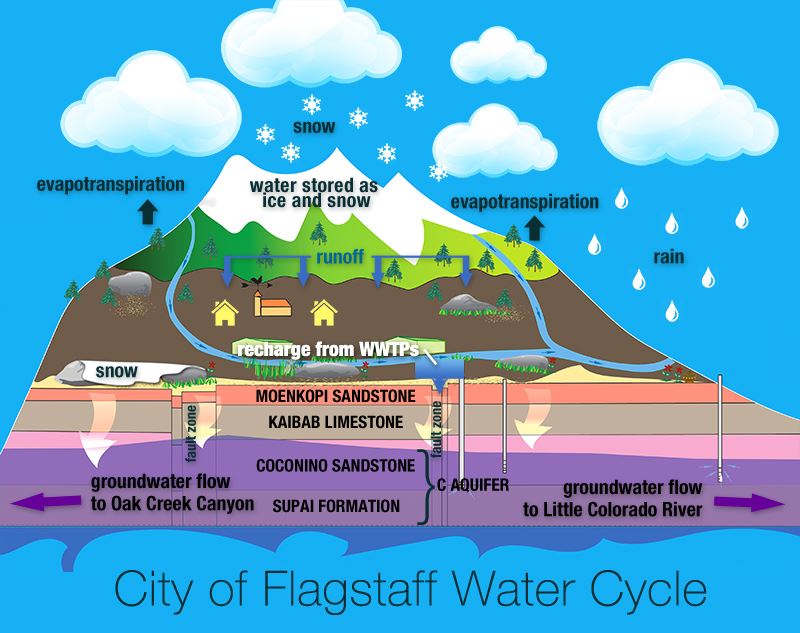 Amelia, a student who found our website helpful during remote learning, suggested that our site might include a Water Cycle Glossary of Terms for other students and families who come across our website. Thank you, Amelia! We agree and really appreciate the great contribution your idea adds to our website.

Aquifer: An aquifer is an underground layer that contains groundwater.

Atmosphere: A unit of atmosphere measures the air pressure at sea level, which is about 14.7 pounds per square inch.

Climate: The climate of a location includes all of the weather conditions for this location over an extended period of time.

Cloud: A cloud is a visible mass of small water droplets or tiny ice crystals that are suspended in the atmosphere.

Condensation: Condensation is the process by which water vapor changes into liquid.

Dew Point: Dew point is the temperature at which water in the air condenses to become water droplets near the ground.

Ecosystem: An ecosystem is a community of living and nonliving things in an area.

Erosion: Erosion happens when soil is worn away, usually by wind, water, or ice.

Evaporation: Evaporation is the process of water changing into water vapor.

Fog: Clouds near the ground are known as fog.

Freshwater: A lake, river, or spring is a source of freshwater, which animals can drink.

Glacier: A glacier is a mass of ice that moves slowly across a land mass.

Groundwater: Groundwater is water found in an aquifer.

Humidity: The amount of water vapor in the air is the humidity.

Lake: A lake is a body of water that is surrounded by land.

Pollutant: A pollutant is a substance that harms a natural resource.

River: A river is a big stream of fresh water that flows.

Runoff: When in rains or when snow melt occurs, it's known as runoff.

Temperature: The level of heat or cold, measured by a thermometer, is temperature.

Vapor: Vapor is liquid that is suspended in air.

Water Cycle: Water moves between the land, bodies of water, and atmosphere in a process known as the water cycle.

Weather: Weather describes the state of the atmosphere, and it includes atmospheric pressure, temperature, humidity, cloudiness, precipitation, and wind.

Wind: Wind is air that moves from areas of high pressure to low-pressure zones.